Is It Worth Repairing a Slate Roof?

Let’s be honest, a slate roof really is the Cadillac of roofs. Slate is nearly indestructible. But that “nearly” part is important. Many homeowners think a slate roof can last forever. After all, there are many buildings with slate roofs pushing two centuries that seem to still be doing fine. So for a roof that can last well beyond a lifetime, it’s understandable that some people think they’ll last forever. But like all things, a slate roof cannot go on forever. So when you start to notice leaks, is it worth repairing a slate roof? Is it just time to throw in the towel and go with something cheaper? Or, if you are a historical purist, is it time for a new slate roof, despite the high cost? Eagle Watch Roofing will take a look at all the options to help you decide when it is worth repairing a slate roof and when it’s time to look at other options. 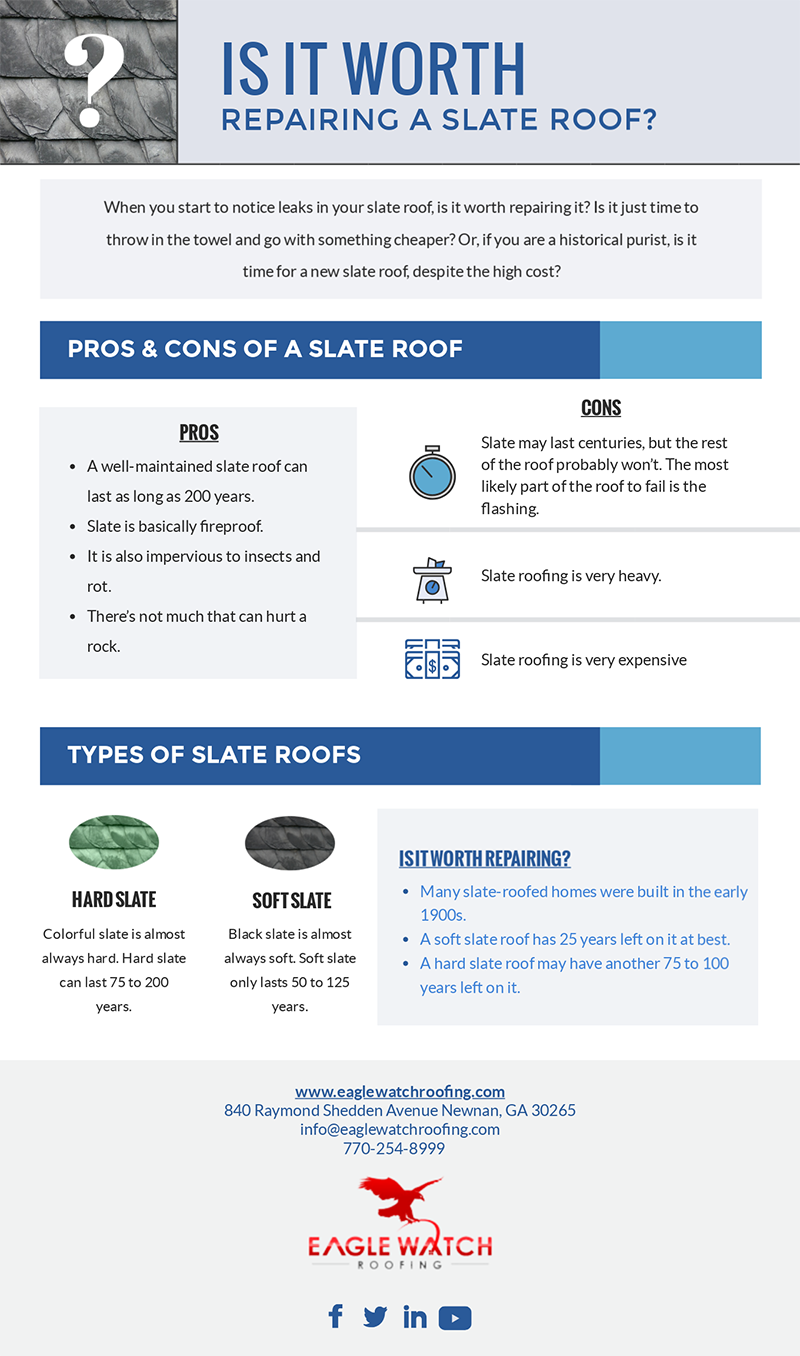 A slate roof has a lot to offer. As we’ve said, a well-maintained slate roof can last as long as 200 years. Because they are stone, they also have some other great qualities compared to other roofing materials. Slate is basically fireproof. It is also impervious to insects and rot. There’s not much that can hurt a rock. But for all their benefits, slate roofs do have some disadvantages as well.

A slate roof has some distinct weak points. First, while the slate may last centuries, the rest of the roof probably won’t. The most likely part of the roof to fail is the flashing. That’s the sheet metal that lines the valleys where two roof slopes meet, as well as your chimney, dormer, or any other roof penetration. Flashing protects areas of the roof that either get a lot of water, like valleys, or have a high risk of leaking, like roof penetrations. Because flashing is typically made of metal, it is vulnerable to rust and corrosion.

Over time, flashing can warp, corrode, and sustain other damage from weather or falling debris. When flashing reaches the end of its lifespan, it needs to be replaced. Typically, once one part of your flashing goes a roofer will recommend replacing it all. The idea is that if some of your flashing is showing its age, it’s likely that other parts aren’t far behind. Replacing all the sheet metal on your roof can be a big job. It would generally be considered in the category of roof restoration. It requires removing the slate around the flashing, replacing the flashing, and reinstalling the old shingles. It’s a routine job for an experienced slater, but the amount of labor involved means a job could range from a few hundred to a few thousand dollars.

The single most significant factor in considering a roof replacement, after age, is the type of slate you have. There are many, many types of slate, but all slate falls into to main categories. There is hard slate and soft slate. Colorful slate is almost always hard. Black slate is almost always soft. The difference in life expectancy can be dramatic. Hard slate can last 75 to 200 years, while soft slate only lasts 50 to 125 years. That’s still a long lifespan for soft slate, as roofs go, but if your home was built in the early 1900s, it could be a vital cutoff point.

Many slate-roofed homes were built in the early 1900s, making the roofs right around 100 years old. If you have a soft slate roof that is showing its age, it may not be worth making any major repairs. The roof has 25 years left on it at best, so it’s unlikely you will see a return on your investment. On the other hand, a hard slate roof may have another 75 to 100 years left on it. In that case, repairing the roof now could keep a roof over your head for the rest of your life.

If your roof is leaking and it’s not the fault of aging flashing, you most likely have one or more broken shingles. Replacing a broken shingle is usually relatively cheap. A single slate roof tile doesn’t cost a lot and the labor involved is minimal.

A common mistake homeowners make is to wait until a few shingles are broken to call out a roofer. While they may imagine that saves money, it is a dangerous game to play. Just one broken tile can let water through to your roof deck. Once water starts to damage the roof deck, you’re in for some very costly repairs or even a full replacement. Waiting for another shingle to break is like waiting to get a cavity filled until you have two or three more. It just doesn’t make sense.

If your slate roof is nearing the end of its life, you may be considering a replacement. Of course, replacing a slate roof with a new slate roof would be ideal, but it can be an expensive proposition. Slate roofs cost about $1,500 per square installed. A square is a standard 10’ x 10’ unit used by roofers. The square footage of your roof is usually about equal to the square footage of your house. So a 2,000 square foot house would have a 2,000 square foot roof, or 20 squares in roofing terms. Installing a new slate roof would cost about $30,000. With that kind of cost, you may be rethinking your ideal slate roof. Luckily, there are cheaper options that still look just as good.

Due to the high desirability and high cost of slate, there are a number of synthetic lookalikes on the market. Slate-look roofing is available in many materials, including ceramic, cement, metal, and even plastic. These lookalike materials may not last quite as long, but they are much cheaper. They are also much lighter than slate. That means that they can be installed on homes that weren’t built for slate without adding extra supports.

One slate-look product is Celadon Ceramic Slate. It costs about $450 a square installed, or less than one-third the cost of slate. StoneCrest is another slate alternative. It is made of galvanized steel and comes with a lifetime warranty, similar to real slate. But at $350 – $600 a square installed, it can easily save you 50% or more over slate.

This really isn’t a fair comparison, because the cheapest asphalt is nothing like slate. Three-tab asphalt shingle is the flat, regularly-sized shingle you see on many suburban homes. It lasts 15-30 years, just a fraction of slate. But if you are determined to save money, the savings of asphalt are huge. Asphalt typically costs around $200 a square installed. On a 2,000 square foot home, that adds up to a savings of more than $25,000. Of course, over the typical 75-year lifespan of a soft slate roof, you would need to replace a cheap asphalt roof 3 to 4 times. Even so, that’s a savings of nearly $15,000 over 75 years.

Time to Repair or Replace a Roof

If it’s time to repair or replace your roof, contact Eagle Watch Roofing. We have replaced and repaired thousands of roofs. Just check out our testimonials to see our many highly satisfied customers. Whatever material you choose for your new roof, we’ll help you discuss your options and get your roof repaired or replaced right. We can also help with insurance claims. If you’re ready to repair or replace your roof, don’t wait. Contact us now or just click on the button above for your free no-obligation estimate.